The Jeep Wrangler is most definitely a leader when it comes to off-roading SUVs, and this model can do more than just take you off the beaten path. The Wrangler is stylish as well as capable and available with the latest features. While you know and love the current Jeep Wrangler, you should start getting excited about the 2018 and 2019 models. Sneak peeks have begun to arrive, giving us a good idea of what changes to expect. Remember that this will be the first full makeover for the model since 2007, meaning you should expect some impressive differences.

One of the things we do know about the upcoming all-new Jeep Wrangler is that there will be a pickup truck version whose name hasn’t yet been released. It will be based on the four-door Wrangler Unlimited and should debut in early 2019 after the all-new Wrangler SUV. 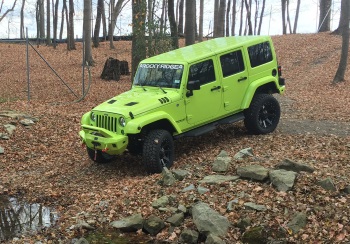 The 2018 Jeep Wrangler will most likely keep the same basic dimensions of the current generation model, with possibly an inch or two being adjusted in each dimension. There will still be the choice of a two-door or four-door model. Experts predict that the new Wrangler will also continue its body-on-frame construction with solid axles in front and rear. For a change, it will probably use a great deal of aluminum as a way to save weight and enhance fuel economy and performance.

The exterior styling information is still limited mostly to spy shots. These spy shots show off a familiar front end with the seven-slot trademark Jeep grille. The front windshield does, however, seem to be raked a bit rearward to help with highway aerodynamics. Expect to see familiarly rounded headlamps but with modern LEDs. The exterior may also include other changes, like the front turn signals going to the front fenders’ leading edge and a revised rear-end treatment with the window raked back nominally. We may also see the taillights in the “X-pattern” found on the Jeep Renegade. Instead of the removable roof, the 2018 Jeep Wrangler may come with a permanent one. A hardtop glass panel roof and power-operated soft-top would both be options. The Jeep heritage features are expected to continue, such as the flip-up rear window, large rectangular windows, side-opening tailgate, and exposed door hinges.

Those in the know predict that the 2018 Jeep Wrangler will have interior changes that borrow elements from the popular Renegade. These may include large and round air vents and gauges and an updated Uconnect system. Expect to see a revised variation of the 3.6-liter Pentastar V6 and maybe even an optional turbo engine.